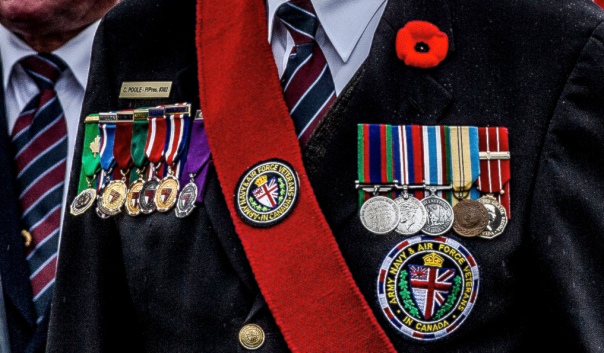 For many of the British Commonwealth countries around the world, Remembrance Day is set aside for honouring those who have died fighting for their countries. One of the traditions around this holiday is the wearing of bright red plastic or cloth poppies, a ritual connected to the poem written by Lieutenant Colonel John McRae, a Canadian physician serving in Beligium in the First World War. Today, the Royal Canadian Legion in Canada sells poppies by donation, money that goes towards the veterans and their families.

As a child, I didn’t understand the importance of the poppy and I remember my friend and I bought up as many poppies as we could and put them on our jackets and shirts. To us, this was something that we could afford. We could put in five or ten cents in the bucket each time we saw someone selling them. We thought we were so cool, that was until one veteran saw us doing this and asked us what we were up to. We sheepishly explained that we were collecting them. He smiled and asked us if we knew what the poppy meant. Of course we didn’t, so he took the time to explain it in a gentle and thoughtful way. I remember us feeling pretty stupid afterward and gave him back all of our poppies, minus one each.

My problem was that I treated the poppy as a commodity, something to be bought, traded for, and displayed as a symbol of pride. What I hadn’t realized was how it was something completely different. Instead, the poppy is a symbol of unity and remembrance. A chance for us to show our support for others, whether rich or poor, common or famous, powerful or weak, we are all the same. It is about identity, a sign to others that we belong to this group, not standing up as individuals. The poppy itself is nothing more than plastic and metal, worthless material made valuable through the action of giving to others.

I don’t know why that came to mind today, but it started me thinking about how we treat assessment in the classroom. Just like the way I treated the poppy, some teachers and students see marks and grades as a commodity, something to collect and show off. It is a badge of pride, not support. Collecting badges, marks, or grades is a singular action with little support for the group as a whole. Amongst students and parents, it is something to displayed as a symbol of individual pride.

Now before I hear about the need to live in the real world, I think it is important to think about what we would like the real world to look like. Do we want to continue fighting each other for superiority, or would we rather that we start supporting one another, identifying ourselves as the group rather than as I? I did this. I got that. I made those. I won these. This thinking shows itself in so many areas. I earned this money, so why should I spend it helping those who are in need? What if we started thinking about people as us, not them.

This is my dream for the classroom, a place where people help one another NOT for the mark or individual recognition, but as a group that identifies itself through the support and encouragement of many. Each person gives to the group that which they have, sharing their expertise and time to grow as a unit. I wish for a place where learning is the ultimate goal, not the byproduct of achievement. I know it is idealistic and won’t amount to much in the end, but you can’t harm me for holding out hope, can you?

Before I sign off, I want to say thank you to each person who has served their country in war. I don’t like war and I lean more towards pacifism, but I also am intelligent enough to know that in this world, there are going to be times that we need to defend that which is right. I wear my poppy not to glorify war, but to remember the devastation and loss because of it and pray for peace.