In 2006, my wife and I packed up our things and moved to Lithuania. One of the first things we did was to purchase a small apartment near the city centre. It was an old German building with only six apartments built around the time when the area was known as East Prussia. The apartment also had a cellar with storage for each apartment and the pipes and services for the whole building. The main door didn’t have a buzzer and need someone with a key to open it. Beside this door was a sign with the phone numbers of those who had keys in case someone needed to get into the cellar such as service personnel.

One day, I was at home getting ready for class when I got a phone call. I hated getting calls since inevitably I wouldn’t understand them and would feel really stupid afterwards. Here is what I heard during that call (in English since it wouldn’t make sense to you otherwise):

Me: I’m sorry, I don’t speak Russian. I do speak a little Lithuanian.

Me: I’m sorry, I don’t speak Russian. Do you speak English?

Me: I’m sorry, I don’t speak understand Russian. Do you speak English?

Caller: [Obviously has had enough of this back and forth] DOOR! KEYS! NOW!

I hung up and ran downstairs with my keys. Opening the door, there is a very frustrated lady standing in front of three large men in overalls laughing their heads off. I unlocked the cellar door and ran back upstairs.

So, what was the problem here? Well, to start with, she wasn’t saying the work Russian, she was saying the phrase “in the cellar” in Lithuanian. By combining the proposition “in” with “the cellar” you get a word that sounds very much like the word for Russian, but with a different stress on one of the syllables. Even though I knew the words for door, keys, and cellar, I couldn’t hear them all when spoken so quickly and in such a long sentence. Once the caller knew this, she adapted her speech to include the most basic pieces needed to comprehend what was being asked.

This semester, I am teaching a new class for me on reading and listening for academic purposes. The class is also new to the school as we did a major curriculum revamp that started last summer. As a result, there aren’t that many teachers in the school who have taught the class and there are even fewer resources available in our resource room. I’ve taught listening classes in the past, but not necessarily at this level. I do have my own resources, including my ELT Listening Materials list, but how do I know what was is appropriate for this level? This started me on a journey yesterday that I thought I would share with you. It is just in the initial stages, but I’ve already noticed a few things that I thought others might find interesting.

There are a number of things that make a listening task easier or more difficult. Some of those things include (but aren’t limited to):

In my circumstance, I didn’t have an understanding of why this person was calling and combining that with the speed, sentence length, lexical complexity, and even a bit of structural complexity led me to making some bad assumptions which probably made it even more difficult for me to understand.

A few weeks back, I tweeted out a tool for analyzing text for CEFR level:

I also recently wrote a post about adapting texts for ELT classes:

The other day, I was preparing for this next semester and I started to wonder if it was possible to use these online tools to analyze audio transcripts in the same way. I started out by taking a few transcripts from listening tasks in coursebooks written for the B2 level as a benchmark. As I started looking at the transcripts, I realized that the type of listening (ex. lecture or conversation) would have an influence on the statistics I would get. I put together a spreadsheet and labeled the listening task by type and then added the numbers I was getting from the Road to Grammar Text Analyzer to it. I tried to get a sampling from few different tasks of the same type to get a better idea of the averages from those tasks at that level.

After spending most of the day yesterday on it, I am already starting to see some interesting things come through. Please note that this is from a very limited sample size and is not meant to be a full on research project, although I am considering taking this much further and eventually writing something up for our BC TEAL Journal.

Armed with these initial numbers, I decided to explore things a bit further. I wanted to find a speech or lecture that closely matched a coursebook lecture in terms of numbers. I wanted to see if what the numbers were giving me were enough to figure out if a speech could be used in my classroom.

I analyzed a number of speeches and lectures before I came across one that came close in numbers. It is a speech by Emma Watson for the UN on gender equality. Here are the numbers: 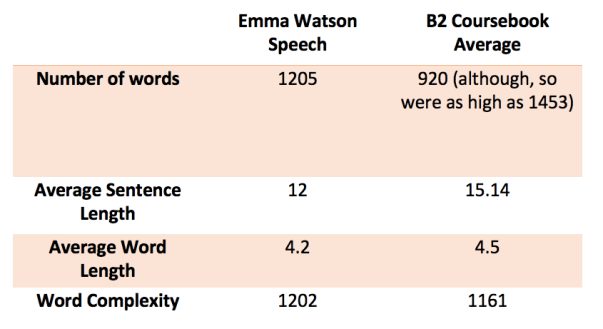 So far so good. Now I wanted to see some more detailed vocabulary information, so I took the text and ran it through the Online Graded Text Editor at the B2 level and I got this:

This looks very promising, at least as a written text. I decided to watch the video to see if the speed and clarity were approximately at the level of my students.

Seriously, I wish I could speak as well as Emma does. The speed is slow enough for my students and the clarity is fantastic.

At this point, I took the Out of Level and Out of List words from Online Graded Text Editor and I reviewed the words to see if I should review them or not with my students. I also took the Band E words from the Road To Grammar Text Analyzer scan and added them to the list. Here are the lists: 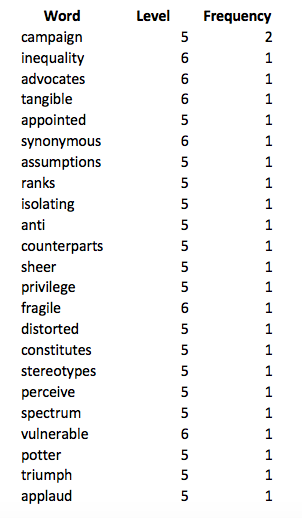 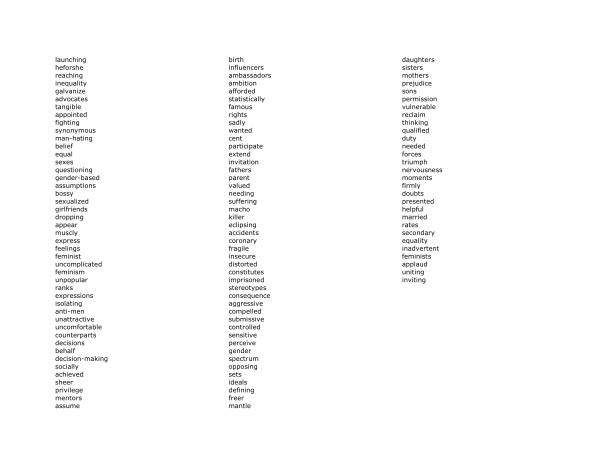 There are a number of overlaps, so those might be important to cover. I looked at these words in context and some of them could be figured out by their situation, so I wouldn’t focus on those. I don’t want to overwhelm my students, so instead of focusing on so many new words, I decided to work on general understanding and comprehension. I would take some of the key words and focus on those, while leaving the rest behind.

I’m not sure where this will go, but this is a start. I would be very interested to hear some comments on this, especially from those who have studied this before or know of some literature on this topic.

One this I may end up doing, although it seems like an overwhelming task at this point, is to start adding the numbers to my ELT Listening Material list for those items that have transcripts. I’ll mull that one over for now.